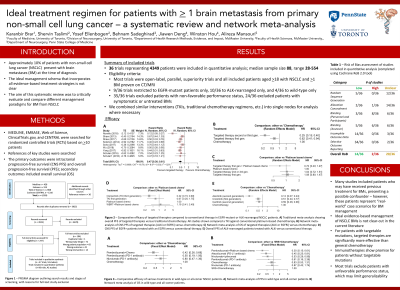 Background: Brain metastases (BM) are common in non-small cell lung cancer (NSCLC). The aim of this study was to assess the comparative effectiveness of treatments for BM from NSCLC.

Conclusions: Our preliminary analyses indicate an OS and PFS benefit on the addition of EGFR inhibitors to WBRT for the treatment of BMs from NSCLC. Further analyses of hazard ratios for OS/PFS are underway, and subgroup analyses are planned.These data support the growing role of targeted therapies in the treatment of BMs, particularly in susceptible mutant tumours.