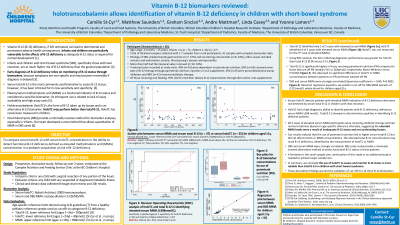 Has Audio
Objectives: Serum total vitamin B12 (tB12) is the most commonly used biomarker to assess B12 status in healthy and patient populations but there is ambiguity as to its performance for early and reliable B12 deficiency diagnosis. Holotranscobalamin (holoTC) is the B12 form taken up by cells and may be a more sensitive B12 indicator. This descriptive, prospective study aimed to compare serum tB12 with serum holoTC concentration in their ability to detect functional B12 deficiency defined as elevated methylmalonic acid (MMA) concentration in a pediatric population at risk of B12 deficiency.

Methods: A total of 26 infants and children aged 3mo-15yrs with a history of ileal resection were recruited from the Children’s Intestinal Rehabilitation Program at the British Columbia Children’s Hospital, Canada. Between 1 to 7 samples per patient were collected over 2yrs, with complete biomarker data for 41 samples. Clinical, anthropometric and dietary data were also collected. Age-specific reference limits derived from a healthy pediatric reference sample were used as cut-offs to categorize B12 deficiency.

Results: Of the 41 samples, 29 (71%) had concordant biomarker results all indicating adequate B12 status. Elevated MMA ( >398nmol/L) was found in only 2 samples and those had holoTC concentration indicative of B12 deficiency (< 40pmol/L) but normal tB12 ( >209pmol/L). While holoTC exceeded tB12 in sensitivity for the detection of functional B12 deficiency, holoTC had reduced specificity, 75% compared to 85% for tB12, leading to a reduced positive predictive value (22%). Patients receiving total parenteral nutrition (TPN) had significantly higher tB12 but similar holoTC concentration compared to those not receiving TPN.

Conclusions: Overall, the results suggest that serum holoTC detects patients with elevated MMA indicative of B12 deficiency, who are not identified by tB12 concentration, in children with short bowel syndrome. It also suggests that the current cut-off for tB12 may be too low. These descriptive findings warrant further evaluation and validation of B12 biomarkers and related cutoffs for adequate, suboptimal and deficient B12 status.