PSX-34 - Late-Breaking Abstract: Effect of Genotype and Temperature-Humidity Index (THI) on milk yield of Ankole and its crossbreeds in Rwanda 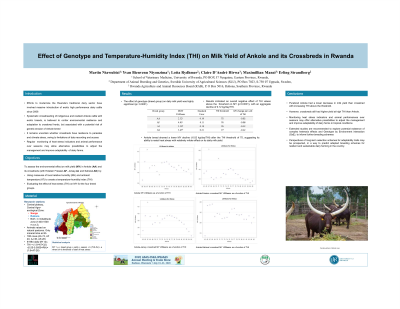 The trend in crossbreeding the indigenous and resilient “Ankole” cattle with imported high performant breeds in Rwanda, believed to boost milk production while tempering on adaptive traits to local environment, leaves cautions on a profiling “genetic erosion” of Ankole. It is uncertain establishing whether new crossbreeds would acquire necessary resilience to parasites and climate stressors, where access to data records is unfordable. The objective of this study was to assess the environmental effect on milk yield (MY) in Ankole and its crossbreeds (with Holstein Frisian-AF, Jersey-AJ and Sahiwal-AS). Data of daily MY (61984 records; n = 188 cows), ambient temperature and relative humidity have been recorded from 2 research farms (Rubona-2.5536’ S, 29.6014’ and Songa-2.24’S, 29.46’E) located in the mid-altitude zone (1400–1500 m.a.s.l), on a period of 4 years (2014–2017). Fixed effects of Temperature-Humidity Index (THI, measure of Heat Stress), parity, genotype and station on MY have been investigated, using a General Linear Model (Y = μ+ p + g + s + rTHI + ℮; SAS 9.4). Results indicated an overall negative effect of THI threshold values on ML (P > 0.0001), with an aggregate decline slope of 0.12kg/day/THI. Ankole breed showed a lower ML decline slope (0.02 kg/day/THI) after the THI threshold of 75, suggesting its ability to resist in heat stress with relatively milder effect on its daily milk yield. However, although with important MY loss induced by THI as compared to Ankole, results suggested the ability of crossbreeds to withstand higher levels of THI thresholds evaluated at 76 with a decline slope of 0.08kg/day/THI and 0.12kg/day/THI, respectively for AH and AJ, while THI thresholds for AS was found at 77 (0.12kg/day/THI). The observed relative resistance of Ankole crossbreds to higher heat stress levels would suggest a possible heterosis effect.