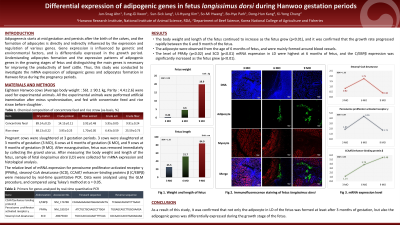 This study was conducted to investigate the mRNA expression of adipogenic makers in Hanwoo fetus during the pregnancy periods. Eighteen Hanwoo cows (Average body weight: 561 ± 90.1kg, Parity: 4.4 ± 2.6) were used for experimental animals. Artificial insemination was performed on all the experimental animals after estrus synchronization. Pregnant cows were slaughtered at 3 gestation periods. Three cows were harvested at 3 months of gestation, 6 cows at 6 months of gestation, and 9 cows at 9 months of gestation. After exsanguination, fetus was removed immediately by collecting the gravid uterus. After measuring the body weight and length of the fetus, sample of fetal longissimus dorsi (LD) were collected for mRNA expression and histological analysis. The relative level of mRNA expression for peroxisome proliferator-activated receptor γ (PPARγ), stearoyl-CoA desaturase (SCD), CCAAT/ enhancer-binding proteins β (C/EBPβ) were measured by real-time quantitative PCR. Data were analyzed using the GLM procedure, and compared using Tukey’s method at α = 0.05. The body weight and length of the fetus continued to increase as the fetus grew (P < 0.01), and it was confirmed that the growth rate progressed rapidly between the 6 and 9 month of the fetus. The adipocyte were observed from the age of 6 months of fetus, and were mainly formed around blood vessels. The level of PPARγ (P < 0.02) and SCD (P < 0.01) mRNA expression in LD were highest at 6 months of fetus, and the C/EBPβ expression was significantly increased as the fetus grew (P < 0.01). As a result of this study, it was confirmed that not only the adipocyte in LD of the fetus was formed at least after 3 months of gestation, but also the adipogenic makers was differentially expressed during the growth stage of the fetus.