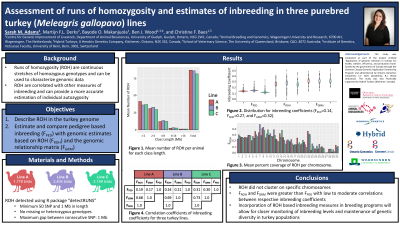 Runs of homozygosity (ROH) are continuous stretches of homozygous genotypes in an individual that have been passed down from a common ancestor and can be used to accurately characterize genomic data. These ROH are correlated with other measures of inbreeding and have been applied to quantify individual autozygosity. The aim of this study was to detect and describe ROH in the turkey genome and estimate and compare measures of pedigree-based inbreeding coefficients (FPED) and genomic-based inbreeding coefficients estimated from ROH (FROH) and the genomic relationship matrix (FGRM). Pedigree records (n = 2,616,890) and genotypic records (n = 6,371) were available from three purebred turkey (Meleagris gallopavo) lines. Genotypic records were collected between 2013 and 2019 and were obtained using a dense single nucleotide polymorphism array (56,452 SNP). The overall mean length of detected ROH per animal was 2.87±0.29 Mb and mean number of ROH per animal was 84.87±8.79. Short ROH with lengths of 1–2 Mb long were the most abundant throughout the genome, accounting for approximately 45% of the identified segments. Mean ROH coverage differed greatly between chromosomes and lines. Across all lines, genomic derived inbreeding coefficients (FROH=0.27; FGRM=0.32) were higher than coefficients estimated from pedigree records (FPED=0.14). Ranges of correlations between FROH and FPED (0.19–0.31), FROH and FGRM (0.68–0.73), and FPED and FGRM (0.17–0.30) were estimated. Results from the current research provide a fundamental description of inbreeding in the turkey genome which is critical considering the growing concerns of the detrimental effects of increased inbreeding on fitness and health in livestock production. The knowledge gained from this study may subsequently be used to evaluate and maintain genetic diversity that is necessary for genetic improvement and minimizing inbreeding in turkey breeding programs.