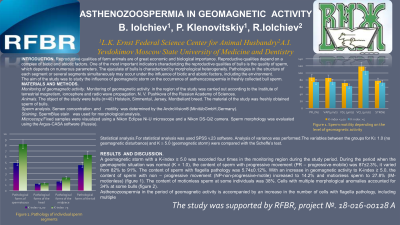 Reproductive qualities depend on a complex of biotic and abiotic factors. The ejaculate of bulls is characterized by morphological heterogeneity. Pathologies in the structure of each segment or several segments simultaneously may occur under the influence of biotic and abiotic factors. The aim of the study was to study the influence of geomagnetic storm on the occurrence of asthenozoospermia in freshly collected bull sperm. Monitoring of geomagnetic activity in the region of the study was carried out according to the Institute of terrestrial magnetism, ionosphere and radio wave propagation. N. V. Pushkova of the Russian Academy of Sciences.Sperm quality assessment was carried out using the software "Argus-CASA." A Mackler's camera was used to assess mobility and concentration. Statistical analysis of the results of the study was carried out using IBM SPSS Statistics 23.0. The slides were visualized using a Nikon Eclipse Ni-U microscope and a Nikon DS-Qi2 camera. A geomagnetic storm with a K-index ≥ 5.0 was recorded four times in the monitoring region during the study period. During the period when the geomagnetic situation was normal (K = 1,0 1.0), the content of sperm with progressive movement (PR – progressive-mobile) was 87±2.3%, it varied from 82% to 91%. The content of sperm with flagella pathology was 5.74±0.12%. With an increase in geomagnetic activity to K-index ≥ 5.0, the content of sperm with non – progressive movement (NP-non-progressive-motile) increased to 14.2% and motionless sperm to 27.8% (IM-motionless). The content of motionless sperm at some individuals was 38%. Cells with multiple morphological anomalies accounted for 34% at some bulls. Asthenozoospermia in the period of geomagnetic activity is accompanied by an increase in the number of cells with flagella pathology, including multiple morphological anomalies. The study was supported by RFBR, project №. 18-016-00128 А