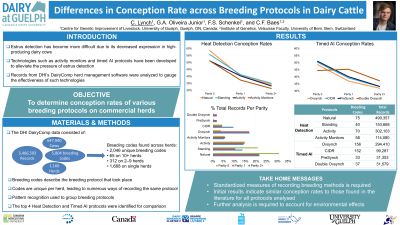 Fertility performance success on dairy farms starts with estrus detection, especially for artificial insemination programs. Detection of estrus has become more difficult over the years due to a decrease in estrus expression in high-producing dairy cows, with up to 60% of ovulations accompanied by no standing mount. In order to alleviate the pressure of estrus detection, management technologies have been developed, including automated detectors of standing heat, activity monitors, automated in‐line systems measuring milk progesterone, and hormonal synchronization protocols (FTAI). To gauge the effectiveness of such technologies, records from 647,940 cows across 1,166 herds over the past ten years (total of 3,466,593 breeding records) from herd management software were analyzed. Across all herds, there were 5,804 breeding protocols, of which 2,046 were unique. Due to the wide range of breeding protocols, records were classified as HORMONES, FTAI, HEAT DETECTION and OTHERS. Breeding protocols were classified as HORMONES if they included any hormone treatment. FTAI was a stricter subset of HORMONES, which included only clear FTAI protocols. Protocols were classified as HEAT DETECTION if they were a clear heat detection protocol, with all remaining protocols classified as OTHERS. These classifications resulted in 3,258 protocols classified as HORMONES, of which 2,002 were FTAI, while a further 1,840 were classified as HEAT DETECTION. The remaining 706 codes were classified as OTHER and removed from this study. These classifications provided an initial overview of breeding methods conception rates, with results indicating significant differences (P < 0.05) between all protocol groups, as outlined in Table 1. Further analysis will be completed to indicate conception rates from the most commonly used breeding protocols across each of the protocol groups within the 1,192 herds. This work will help provide a better understanding of the expected conception rate of various management technologies on commercial farms.