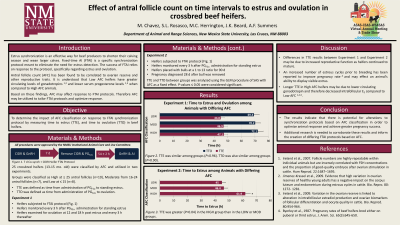 While genetics are an unreliable indicator of fertility, antral follicle count (AFC) has recently been recognized as a useful fertility prediction tool in heifers. The aim of this study was to determine if AFC exerts an effect on response to synchronization, time to estrus (TTE), and/or time to ovulation (TTO). Twenty-five crossbred heifers were classified by AFC, either high ( > 25 antral follicles), moderate (16-24 antral follicles), or low (< 15 follicles) and utilized in two experiments. In experiment 1, heifers were subjected to the Select Synch + CIDR fixed time artificial insemination (FTAI) protocol. After synchronization, estrus activity was monitored every 3 h until standing estrus was observed. Heifers were examined at 12 and 18 h after observation of standing estrus and every 3 h thereafter to monitor ovulation. In experiment 1, the proportion of heifers that responded to the protocol was not significant (P = 0.71) among classification groups. Time to estrus and time to ovulation were similar between groups (P > 0.90). In experiment 2, heifers were placed with bulls for 60 d and were monitored for signs of estrus every 3 h. Results of experiment 2 indicated that response to estrus synchronization was similar across groups (P = 0.46). Time to estrus was greater (P = 0.04) in the high AFC group than in the low or moderate AFC groups. This may be attributed to lower concentrations of circulating gonadotropins in high AFC heifers, resulting in decreased intrafollicular estradiol. Differences in TTE results between experiment 1 and experiment 2 may be explained by increased reproductive function as heifers continued to mature during the study. These results suggest that differences in TTE may be related to AFC. Additional research is needed to corroborate these results and inform the creation of differing FTAI protocols based on AFC.