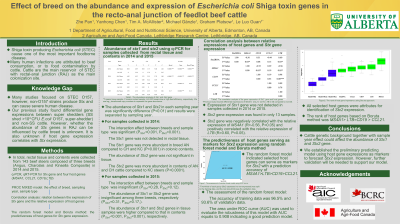 Shiga toxin (Stx) is the main virulence factor of Shiga toxin-producing E. coli (STEC), and ruminants including cattle are the main reservoir of STEC. This study aimed to assess whether cattle breed affects the abundance and expression of Stx and to determine whether the expression of host immune genes can serve as markers of STEC colonization. In total, 143 rectal tissue and content samples were collected from feedlot beef steers in 2014 (n = 71) and 2015 (n = 72) composed of three breeds (Angus, Charolais and Kinsella Composite) with differing feed efficiency. The abundance and expression of Stx1 and Stx2 by STEC associated with rectal tissue was quantified by qPCR and reverse-transcription-qPCR, respectively. Four immune genes (MS4A1, CCL21, CD19, and LTB), previously reported to be down-regulated in super-shedder cattle (i.e., > 104 cfu g-1) were selected and their expression was evaluated using qPCR. The abundance of stx1 and stx2 differed (P < 0.001) among breeds in rectal content samples collected in 2014, while no such difference was detected for 2015 samples. Correlation analysis showed that the expression of stx2 was negatively correlated with MS4A1 (R = -0.56, P = 0.05) and positively associated with LTB (R = 0.60, P = 0.05). The random forest model revealed that the expression of selected immune genes could be used as indicators of Stx2 expression and potential STEC colonization with prediction accuracy of MS4A1 >LTB >CCL21 >CD19. Our results indicate that the abundance and expression of Stx could be affected by cattle breed and the year of sampling, suggesting that host genetics and environment influence STEC colonization. The relationship between the expression of host genes associated with immunity and Stx by STEC expression suggests a role of host in STEC colonization, but further validation is needed to confirm the predictiveness of identified markers.