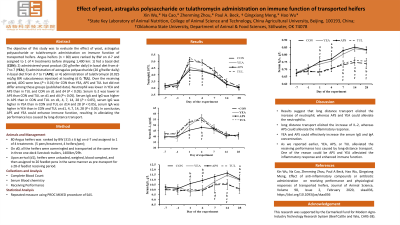 Transportation stress of beef calves results in decreased performance and increased medication costs. The hypothesis of the current research was that yeast, astragalus polysaccharide, or tulathromycin administration would enhance immune function and alleviate the performance loss caused by long-distance transport. Angus heifers (n = 80) were ranked by BW on d -7 and assigned to 1 of 4 treatments before shipping 1,400 km: 1) fed a basal diet (CON) 2) administered yeast product (20 g/heifer daily) in basal diet from d -7 to 7 (YEA); 3) administration of astragalus polysaccharide (20 g/heifer daily) in basal diet from d -7 to 7 (APS); or 4) administration of tulathromycin (0.025 mL/kg BW subcutaneous injection) at loading (d 0; TUL). During transport (29 h duration) cattle remained in the trucks at all times. Upon arrival (d 1), heifers within each treatment were ranked by BW and assigned to 20 feedlot pens (5 pens/treatment, 4 heifers/pen). Blood was collected on d -7, -1, 1, and 7. Blood parameters among treatments over time were compared by SAS using linear mixed models with repeated measures. Over the receiving period, ADG were less (P < 0.01) for CON than YEA, APS and TUL but did not differ among these groups. A treatment × day interaction was detected for neutrophil, IgA and IgG (P < 0.05), where neutrophil was lower in YEA and APS than in TUL and CON on d 1 (P < 0.05). Serum IgA was higher in YEA and APS than in CON and TUL on d 1 (P < 0.05), serum IgG was higher in APS than in YEA, CON and TUL on d 1 and 7 (P < 0.05). In conclusion, APS and YEA could enhance immune function, resulting in alleviating the performance loss caused by long-distance transport.