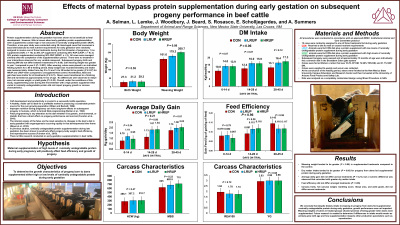 Late gestation protein supplementation has been shown to be beneficial to fetal development. However, little is known about early gestation protein supplementation when supplements contain high or low amounts of ruminally undegraded protein (RUP). Therefore, two-year study was conducted using 28 mixed-aged cows consumed a basal diet balanced to meet nutrient requirements for early gestation were randomly assigned to receive one of three treatments during the first trimester of pregnancy, 1) no supplement (CON; n = 10); 2) 38% CP supplement containing 36% RUP (LRUP; n = 9); 3) 38% protein supplemented containing 50% RUP (HRUP; n = 9). All cows were managed similarly after the completion of the supplementation period. There were no treatment × year interactions observed for any variable measured. Subsequent progeny birth BW did not differ between treatments (P = 0.19). Calf weights did not differ due to treatment due to treatment (P ≥ 0.08) at weaning; however, calf weaning weight was greater in year 1 compared to year 2 (P < 0.0001). After weaning, calves were placed in an individual feeding system for a 60 d feeding period. Body weight was recorded biweekly and intake was measured daily. Intake from day 0 to 14 and 14 to 28 tended to be greater (P ≤ 0.07) for HRUP and LRUP when compared to unsupplemented control. Nonetheless, ADG and gain:feed was similar for all treatments (P ≥ 0.21). Steers were transitioned to a finishing diet and harvested at approximately 18 mo of age. No differences were observed in ribeye area, hot carcass weight or yield grade (P ≥ 0.23). Overall, under the conditions of this study, supplementing cows during the first trimester with a high protein supplement that varied in ruminally undegradable protein did not impact progeny growth or carcass characteristics.