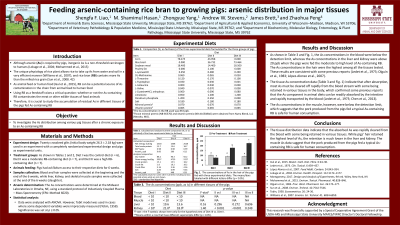 Previous research suggested that arsenic (As) is required by pigs, while inorganic As is a non-threshold carcinogen to humans. This research was conducted to study the As tissue distribution in pigs fed As-containing rice bran (833 ppb). Twenty individually penned gilts (26.3 kg) were randomly assigned to 3 dietary treatments (n = 6 or 7) with Diets I, II, and III containing 0, 306, and 612 ppb As, respectively. Pigs were fed ad libitum for 6 weeks, and the blood and hair samples were collected immediately before and after. Pigs were harvested at the end of the 6-weeks, and the liver, kidney, and muscle samples were collected. The total As contents in all samples were determined by a commercial laboratory. Data were analyzed with ANOVA, Tobit, or ordinary least squares regression model where appropriate. No pig displayed any poisoning signs throughout the trial. The hair As concentrations of Diets II and III pigs were both higher (P < 0.003) than Diet I pigs, and the hair As concentration of Diet III pigs was higher (P = 0.007) than Diet II pigs. The blood As concentrations were all below the detection limit. In kidney and liver, the As concentrations in Diets II and III pigs were higher (P = 0.01) and numerically higher (P < 0.30), respectively, than Diet I pigs, and there was no difference (P > 0.10) between Diets II and III pigs. In skeletal muscle, the As concentrations were all below 10 ppb. These As tissue distribution data indicate that the absorbed As was rapidly cleared from the blood with some retained in various organs. While pigs’ hair retained the highest level of As, the retention is much lower in the liver and kidney. The muscle As data suggest that the pork produced from the pigs fed a typical As-containing rice bran is safe for human consumption.