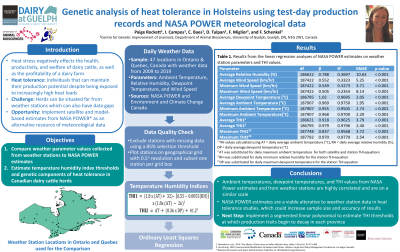 Heat stress in dairy cattle is an existing issue in temperate regions that can cause reduced milk production, impaired fertility, and mortality. Genetic selection for heat tolerance using test-day production records and weather station data is a potential mitigation strategy. However, weather stations can have temporal data gaps and a low spatial resolution, which reduces the number of herds that can be incorporated into an analysis. The objectives for this study include: (1) compare satellite-based meteorological data from the NASA POWER database to weather station records in Ontario and Quebec, (2) evaluate the effects of heat stress on Canadian Holsteins, and (3) assess breeding value estimates for heat tolerance in the same population. Daily estimates of ambient temperature, dewpoint temperature, relative humidity, and wind speed from 481 weather stations in Ontario and Quebec were compared to the parameters estimated by the NASA POWER project using an ordinary least squares regression. The coordinates of herds in Ontario and Quebec were estimated using their addresses and Google Maps Geocoding. The best weather data for each herd location will be incorporated into two random regression animal models to analyze three test-day production traits: milk, fat, and protein yield. The first model will be used to estimate general and specific additive genetic merits over the thermal gradient. The second model will estimate the traditional additive genetic merit. In conclusion, this study explores the use of satellite estimated meteorological parameters in addition to or alternatively to weather station data in heat tolerance studies, quantifies the sensitivity of Canadian dairy cattle to heat stress, and evaluates if genetic selection for increased heat tolerance in Canadian dairy herds is possible.