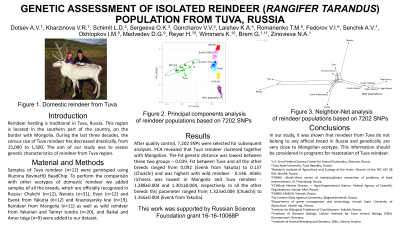 Reindeer herding is traditional in Tuva, Russia. This region is located in the southern part of the country, on the border with Mongolia and isolated from the other reindeer herding areas of Russia. During the last three decades, the census population size of Tuva reindeer has decreased drastically, from 15,000 to 1,500 heads. The aim of our study was to assess genetic characteristics of Tuva population of reindeer. Samples of Tuva reindeer (n = 12) were genotyped using Illumina BovineHD BeadChip. To perform the comparison with other ecotypes of domestic reindeer we added samples of all the breeds, which are officially recognized in Russia: the Chukotka (n = 12), the Nenets (n = 31), the Even (n = 12) and the Evenk from Yakutia (n = 12) and Krasnoyarsk region (n = 19). Reindeer from Mongolia (n = 11) as well as the wild reindeer from Yakutian and Taimyr tundra (n = 20), and Baikal and Amur taiga (n = 9) were added to our dataset. After quality control, 7,202 SNPs were selected for subsequent analyses. On PCA plot Tuva reindeer were clustered together with Mongolian reindeer. The FST genetic distance was lowest between these two groups – 0.039 comparing to FST values between Tuva and other groups of domestic reindeer, which ranged from 0.092 (the Evenk from Yakutia) to 0.137 (the Chukotka) and were highest between Tuva and wild reindeer populations (0.146). Allelic richness was lowest in Mongolia (1.288±0.004) and Tuva reindeer (1.301±0.004). In other breeds this parameter ranged from 1.323±0.004 (the Chukotka) to 1.356±0.004 (the Evenk from Yakutia). In our study, it was shown that reindeer from Tuva do not belong to any official breed of Russia and genetically are very close to Mongolian ecotype. Our results should be considered at developing programs for restoration of Tuva reindeer. This work was supported by Russian Science Foundation grant 16-16-10068-P