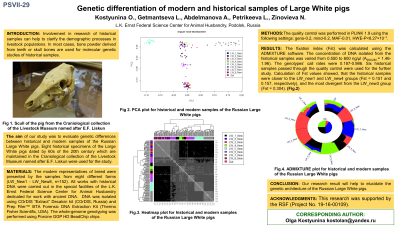 Involvement in research of historical samples can help to clarify the demographic processes in livestock populations. In most cases, bone powder derived from teeth or skull bones are used for molecular genetic studies of historical samples. The aim of our study was to evaluate genetic differences between historical and modern samples of the Russian Large White pigs. Eight historical specimens of the Large White pigs dated by 60s of the 20th century which are maintained in the Craniological collection of the Livestock Museum named after E.F. Liskun were used for the study. The modern representatives of breed were presented by the samples from eight different farms (LW_New1 - LW_New8, n = 152). All works with historical DNA were carried out in the special facilities of the L.K. Ernst Federal Science Center for Animal Husbandry dedicated for work with ancient DNA.  DNA was isolated using COrDIS “Extract” Decalcin kit (COrDIS, Russia) and Prep Filer™ BTA Forensic DNA Extraction Kit (Thermo Fisher Scientific, USA). The whole-genome genotyping was performed using Porcine GGP HD BeadChip chips (Illumina/Novogene, USA). The quality control was performed in PLINK 1.9 using the following settings: geno-0.2, mind-0.2, MAF-0.01, HWE-P< 8.27×10−7. The fixation index (Fst) was calculated using the ADMIXTURE software. The concentration of DNA isolated from the historical samples was varied from 0.550 to 600 ng/μl (A260/280 = 1.46-1.96). The genotypes’ call rates were 0.187-0.986. Six historical samples passed through the quality control were used for the further study. Calculation of Fst values showed, that the historical samples were closer to the LW_new1 and LW_new4 groups (Fst = 0.151 and 0.157, respectively), and the most divergent from the LW_new3 group (Fst = 0.304). Our research result will help to elucidate the genetic architecture of the Russian Large White pigs. This research was supported by the RSF (Project No. 19-16-00109).