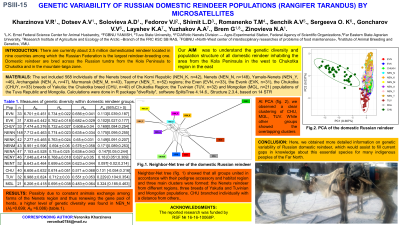 Domestic reindeer are bred across the Russian tundra from the Kola Peninsula to Chukotka and in the mountain-taiga zone. To understand the genetic diversity and population structure of domestic reindeer, 528 individuals were analyzed using 14 microsatellites. The sample included the Nenets breed of the Komi Republic (NEN_K, n = 42), Nenets (NEN_N, n = 148), Yamalo-Nenets (NEN_Y, n = 46), Archangelsk (NEN_A, n = 47), Murmansk (NEN_M, n = 43), Taymyr (NEN_T, n = 52) regions; the Even (EVN, n = 33), the Evenk (EVK, n = 31), the Chukotka (CHUY, n = 33) breeds of Yakutia; the Chukotka breed (CHU, n = 40) of Chukotka Region; the Tuvinian (TUV, n = 32) and Mongolian (MGL, n = 21) populations of the Tuva Republic and Mongolia. Calculations were done in R package "diveRsity," software SplitsTree 4.14.6., Structure 2.3.4. Possibly due to permanent exchanges with animals among farms of the Nenets region and thus introduction of “foreign” alleles into the herds, a higher level of genetic diversity was found in NEN_N (HE=0.699; AR =6.086). All groups had a significant homozygote excess with the maximal value of FIS in geographically isolated populations MGL (0.326) and TUV (0.229). Neighbor-Net tree showed formation of three main clusters according to breed origin and breeding region: (1) the Nenets reindeer from different regions, (2) three breeds of Yakutia and (3) TUV and MGL populations. CHU branched individually with a distance from others. At K = 11 of STRUCTURE, we observed a clear clustering of CHU, MGL, TUV, NEN_T. A middle level of admixture was detected in NEN_A, NEN_Y, NEN_M and NEN_N with NEN_K and CHUY with EVN/EVK, which formed one cluster. Here, we obtained more detailed information on genetic variability of Russian domestic reindeer, which would assist to fill current gaps in knowledge about this essential species for many indigenous peoples of the Far North. The study was funded by the RSF within Project no. 16-16-10068-P.