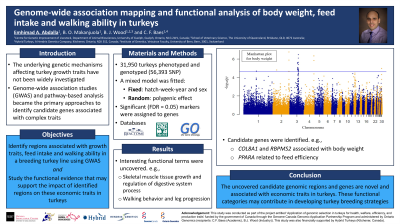 The underlying genetic mechanisms affecting turkey growth traits have not been widely investigated. Over the last few years, genome-wide association studies (GWAS) became the de facto approach to identify candidate regions associated with complex phenotypes and diseases in livestock. In the present study, we performed GWAS to identify regions associated with growth traits, feed intake and walking ability in a breeding turkey line. This was followed by studying the functional evidence that may support the impact of those regions on the economic traits in turkeys. A total of 31,950 phenotypic records for body weight, feed intake and walking ability with genomic (56,393 SNP) data were provided by Hybrid Turkeys, Kitchener, Canada. The analysis was carried out using a mixed linear model with hatch-week-year and sex fitted as fixed effects and the accumulated effect of all markers captured by the genomic relationship matrix fitted as random polygenic effects. Significant markers were observed on several chromosomes across the turkey genome. For example, COL8A1 and RBPMS2 genes were identified on chromosome 1 and 12, respectively, and associated with body weight. Furthermore, a gene-set enrichment analysis was performed for each trait. These functional and positional analyses uncovered a number of gene ontology functional terms, Reactome pathways and Medical Subject Headings that showed significant enrichment of genes associated with the studied traits. Many of the observed gene ontology functional terms (e.g., skeletal muscle tissue growth, regulation of digestive system process, and adult walking behavior) are known to be related to body growth, feed intake and walking ability. The results of this study revealed novel candidate genomic regions and candidate genes that could be managed within a turkey breeding program.