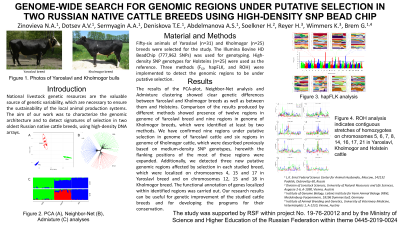 National livestock genetic resources are the valuable source of genetic variability, which are necessary to ensure the sustainability of the local animal production systems. The aim of our work was to characterize the genomic architecture and to detect signatures of selection in two oldest Russian native cattle breeds, using high-density DNA arrays. Fifty-six animals of Yaroslavl (n = 31) and Kholmogor (n = 25) were selected for the study. The Illumina Bovine HD BeadChip (777,962 SNPs) was used for genotyping. High-density SNP genotypes for Holsteins (n = 25) were used as the reference. Three methods (Fst, hapFLK, and ROH) were implemented to detect the genomic regions to be under putative selection. The results of the PCA-plot, Neighbor-Net analysis and Admixture clustering showed clear genetic differences between Yaroslavl and Kholmogor breeds as well as between them and Holsteins. Comparison of the results produced by different methods showed presence of twelve regions in genome of Yaroslavl breed and nine regions in genome of Kholmogor breeds, which were identified at least by two methods. We have confirmed nine regions under putative selection in genome of Yaroslavl cattle and six regions in genome of Kholmogor cattle, which were described previously based on medium-density SNP genotypes, herewith the flanking positions of the most of these regions were expanded. Additionally, we detected three new putative genomic regions affected by selection in each studied breed, which were localized on chromosomes 4, 15 and 17 in Yaroslavl breed and on chromosomes 12, 15 and 18 in Kholmogor breed. The functional annotation of genes localized within identified regions was carried out. Our research results can be useful for genetic improvement of the studied cattle breeds and for developing the programs for their conservation. The study was supported by RSF within project No. 19-76-20012.