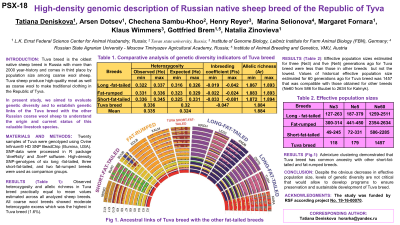 Tuva breed is the oldest native sheep breed in Russia with more than 2000 year-history and comes in third place by population size among coarse wool sheep. Tuva sheep produce high-quality meat as well as coarse wool to make traditional clothing in the Republic of Tyva. In present study, we aimed to evaluate genetic diversity and to establish genetic links of the Tuva breed with the other Russian coarse wool sheep to understand the origin and current status of this valuable livestock species. Twenty samples of Tuva were genotyped using Ovine Infinium® HD SNP BeadChip (Illumina, CA, USA). SNP-data were processed in PLINKv1.9, R package ‘diveRsity’ and SneP software. High-density SNP-genotypes of 10 coarse wool sheep breeds were used as comparison groups. Observed heterozygosity (Ho) and allelic richness (Ar) in Tuva breed were 0.336 and 1.884, respectively, and were practically equal to mean values estimated across all analyzed sheep breeds (Ho=0.335, Ar=1.884). All coarse wool breeds showed moderate heterozygote excess which was the highest in Tuva breed (1.6%). Effective population sizes estimated for three and five generations ago for Tuva breed (Ne3 =118 and Ne5 =179) were less than those in other breeds (Ne3 = 314 and Ne5 = 441 for Edilbai or Ne3 = 300 and Ne5 = 450 for Kalmyk) but not the lowest (Ne3 = 49 and Ne5 = 72 for Buubei). Values of historical effective population size estimated for 60 generations ago for Tuva breed was 1457 that was compatible with those obtained for other breeds (Ne60 from 586 for Buubei to 2634 for Kalmyk). Despite the obvious decrease in effective population size, levels of genetic diversity are not critical that would allow to develop programs to ensure preservation and sustainable development of Tuva breed. The study was funded by RSF No. 19-16-00070.