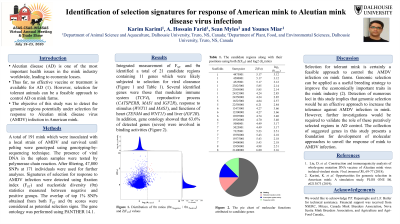 Aleutian disease (AD) is one of the most important health problems in the mink industry worldwide, leading to economic losses. We used a set of single nucleotide polymorphisms (SNPs) to detect the genomic regions potentially under selection for response to Aleutian mink disease virus (AMDV) infection in black American mink. A total of 191 mink which were inoculated with a local strain of AMDV and survived until pelting were genotyped using genotyping-by-sequencing technique. The presence of viral DNA in the spleen samples were tested by polymerase chain reaction. After filtering, 47,800 SNPs at 171 individuals were used for further analyses. Signatures of selection for response to AMDV infection were detected using fixation index (FST) and nucleotide diversity (θπ) statistics measured between negative and positive groups. The overlap of top 1% SNPs obtained from both FST and θπ scores were considered as potential selection signs. This measurement identified a total of 21 candidate regions containing 11 genes which were likely subjected to selection for viral clearance. Several identified genes were those that modulate immune system (TCF4), reproductive process (CATSPERB, MAS1 and IGF2R), response to stimulus (WNT11 and MAS1), and functions of heart (TENM4 and WNT11) and liver (IGF2R). In addition, gene ontology showed that 63.6% of detected genes (seven) were involved in binding activities (GO:0005488). These genes can be used in molecular assessment of viral clearance in American mink. The results indicated that selection for viral clearance and thus AD tolerant animals can be a feasible strategy to deal with the global AMDV infection on mink farms.