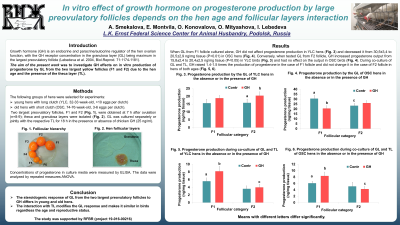 Growth hormone (GH) is an endocrine and paracrine/autocrine regulator of the hen ovarian function, with the GH receptor concentration in the granulosa layer (GL) being maximum in the largest preovulatory follicle (Lebedeva et al. 2004, Biol.Reprod. 71:1174–1181). In the present study, GH effects on in vitro production of progesterone by GL from the two largest yellow follicles (F1 and F2) were investigated due to the hen age and the presence of the theca layer (TL). Young hens with long clutch (YLC, 32-33 week-old, >10 eggs per clutch) and old hens with short clutch (OSC, 74-76 week-old, 3-6 eggs per clutch) were used. After isolation, GL from F1 and F2 follicles (n = 8–9) was cultured separately or jointly with the respective TL for 18 h in the presence or absence of chicken GH (25 ng/ml). Concentrations of progesterone in culture media were measured by ELISA. The data were analyzed by repeated measures ANOVA. When GL from F1 follicle cultured alone, GH did not affect progesterone production in YLC hens and decreased it from 30,5±3,4 to 20,5±2,9 ng/mg tissue (P < 0.01) in OSC hens. Conversely, when tested GL from F2 follicle, GH increased progesterone output from 15,8±2,4 to 20,4±2,5 ng/mg tissue (P < 0.05) in YLC birds and had no effect on the output in OSC birds. During co-culture of GL and TL, GH raised 1.4-1.5 times the production of progesterone in the case of F1 follicle and did not change it in the case of F2 follicle in hens of both ages. The findings indicate that the steroidogenic response of GL from the two largest preovulatory follicles to GH differs in young and old hens. However, the interaction with TL modifies the GL response and makes it similar in birds regardless the age and reproductive status. The study was supported by RFBR (19-016-00216).