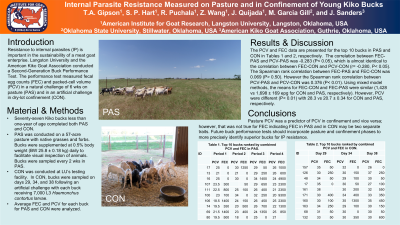 Resistance to internal parasites (IP) is important in the sustainability of a meat goat enterprise. Langston University (LU) and the American Kiko Goat Association conducted a Second­Generation Buck Performance Test in 2019. The performance test measured fecal egg count (FEC) and packed-cell volume (PCV) in a natural challenge of 6 wk on pasture (PAS) and in an artificial challenge in dry-lot confinement (CON). Seventy-seven Kiko bucks less than 1 yr of age completed both PAS and CON. The PAS was conducted on a 23-ha pasture with native grasses and forbs. Bucks were supplemented at 0.5% BW (25.8±0.18 kg) daily to facilitate visual inspection of animals. CON was conducted at LU’s testing facility. Bucks were sampled every 2 wk in PAS. In CON, bucks were sampled on d 29, 34, and 38 following an artificial challenge with each buck receiving 7,000 L3 Haemonchus contortus larvae. Average FEC and PCV for each buck for PAS and CON were analyzed. The correlation between FEC-PAS and PCV-PAS was -0.283 (P < 0.05), which is almost identical to the correlation between FEC-CON and PCV-CON (r=-0.280, P < 0.05). The Spearman rank correlation between FEC-PAS and FEC-CON was 0.069 (P > 0.50). However, the Spearman rank correlation between PCV-PAS and PCV-CON was 0.376 (P < 0.01). Using mixed model methods, the means for FEC-CON and FEC-PAS were similar (1,428 vs 1,698±169 epg for CON and PAS, respectively). However, PCV were different (P < 0.01), with 28.3 vs. 20.7±0.34 for CON and PAS, respectively. Pasture PCV was a predictor of PCV in confinement and vice versa; however, that was not true for FEC, indicating that FEC in PAS and in CON may be two separate traits. Future buck performance tests should incorporate pasture and confinement phases to more precisely identify superior bucks for IP resistance.