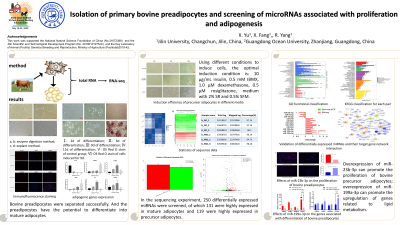 Results: The result showed that more lipid drops in induced group were observed and stained red compared with control group. The expression levels of key genes (pparγ, c/ebpα, fabp4, fasn and leptin) associated with adipogenesis were increased. Dlk1, as a marker gene of preadipocytes, was scarcely expressed in adipocytes. The content of cellar triglycerides detected in adipocytes was significantly upgraded. 131 miRNAs were found to be highly expressed in bovine adipocytes, and 119 miRNAs were highly expressed in bovine preadipocytes. KEGG pathway analysis showed that 4.76% of the differentially expressed genes were enriched in lipid metabolism. Discussion and conclusion: Previous studies have found that some miRNAs could regulate lipid metabolism. But few studies have explored the relationship between miRNAs and adipogenesis. In our study, we characterized the miRNAs associated with adipogenesis in bovine preadipocytes. The expression profiles of 11 miRNAs verified by q-PCR, including miR-149-5p, miR-199a-3p, miR-199a-5p, miR-148a and miR-449a were the same to sequencing data. Based on the KEGG pathway analysis, the predicted target genes were mainly enriched in signal transduction, catabolism and lipid metabolism. This work contributes to existing knowledge by providing an understanding of bovine adipogenesis at the molecular level.