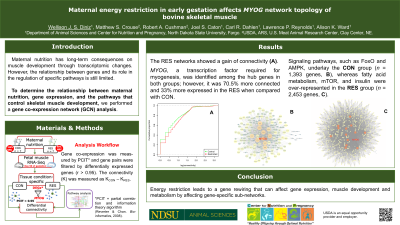 Maternal nutrition has long-term consequences in muscle development through transcriptomic changes. Although gene expression differences were reported between dietary treatments, the relationship between genes and its role in the regulation of specific pathways is still limited. Herein, we performed a gene co-expression network (GCN) analysis to determine the relationship between maternal nutrition, gene expression, and the pathways that control skeletal muscle development. Gene expression was measured with RNA-Seq in 14 fetuses collected on day 50 of gestation from dams fed a diet initiated at breeding to either achieve 60% (RES, n = 7) or 100% (CON, n = 7) of NRC energy requirements. After data quality control, mapping, and normalization, we constructed a GCN for 14,205 genes by using the PCIT approach. The networks were built individually for CON and RES groups resulting in approximately 3 and 4 million significantly correlated pairs (P < 0.05), respectively. To reduce the network complexity, we selected those correlated genes (r > |0.95|) that were previously reported as differentially expressed for these animals. Although we identified a greater number of hub genes in the CON group (35 vs. 22), the connectivity degree was significantly higher in RES. The over-representation analysis pointed out different pathways between the exclusively connected genes from each group. Signaling pathways such as FoxO and AMPK underlay the CON group (n = 1,393 genes), whereas fatty acid metabolism, mTOR, and insulin were over-represented in the RES group (n = 2,453 genes). MYOG, a transcription factor required for myogenesis, was identified among the hub genes in both groups; however, it was 70.5% more connected and 33% more expressed in the RES group (P < 0.001). In summary, energy restriction likely modulates gene expression, specific functions, and consequently, muscle metabolism by affecting gene-specific sub-networks. USDA is an equal opportunity provider and employer.