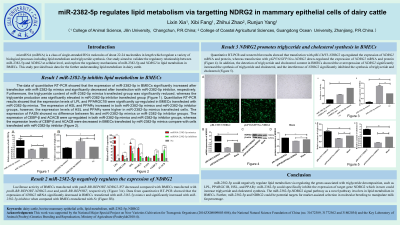 Introduction: Based on the conjoint analysis of RNA-seq and Solexa sequencing of BMECs from dairy cattle with high and low milk fat percentages, miRNA2382-5p was screened as a differentially expressed miRNA, and NDRG2 might be the target gene of miRNA2382-5p. Materials and

Methods: The experimental BMECs were previously constructed in our laboratory. The triglyceride Kit was used to separate the cells and detect the content of triglyceride. The target relationship of miRNA2382-5p and NDRG2 was validated by luciferase reporter assay, qRT-PCR and western blot. The data were analyzed by GraphPad 6.0.

Conclusions: Comparative proteomics analysis of longissimus muscle from different breeds of cattle showed that NDRG2 was positively correlated with intramuscular fat deposition. In our study, we screened NDRG2 as a DEG in both the RNA-seq and conjoint analyses and confirmed that NDRG2 is a target gene of miRNA2382-5p. MiRNA2382-5p can inhibit the production of triglyceride, and the overexpression of NDRG2 can promote the production of triglyceride. Therefore, we believe that miRNA2382-5p can affect triglyceride production by negatively regulating the expression of NDRG2.