PSVIII-17 - Modeling of glyphosate speciation in rumen fluid of cattle 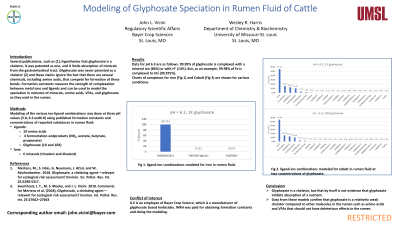 Glyphosate, the active ingredient in Roundup® agricultural herbicides, is used on crops that are commonly grown for animal feed. Even though there has not been empirical data to suggest that animal productivity and health are affected when glyphosate-based products are used as labeled, accusations based on hazard identification alone have circulated widely. One of these accusations originates regarding a patent that was never held by Monsanto (now part of the Bayer Group) that did not include glyphosate. This claim hypothesizes that glyphosate could chelate minerals in the gut and prevent absorption. Formation constants measure the strength of complexation between metal ions and ligands and can be used to model the speciation in mixtures of minerals, amino acids, VFAs, and glyphosate as they exist in the rumen. The amines and carboxylic acids of all amino acids and functional side chains such as the imidazole group of histidine are potential donors for binding minerals. Likewise, carboxylic acid groups from VFAs are prevalent sources for binding of minerals. Literature references of concentrations of minerals and amino acids were used along with a measurement of glyphosate, and speciation calculations were performed at three pH’s commonly encountered in the rumen (5.8, 6.3 and 6.8). This calculation identified all species present at ≥0.01%. Using pH=6.3 as an example, 55.1% of cobalt is present as free Co2+, 28.6% is bound to a VFA (acetate, propionate or butyrate), and 13.1% is bound to histidine.  The remaining 1.6% is distributed among Ala, Asp, Cys, Glu, Gly, Lys, Met, Ser, Thr, NH3 and OH.   Similar results by ligand will be presented for Fe, Zn, Cu, Mn, Ca, His, Cys, and Glu. Data from these models confirm that glyphosate is a relatively weak chelator that should not have deleterious effects in the rumen.