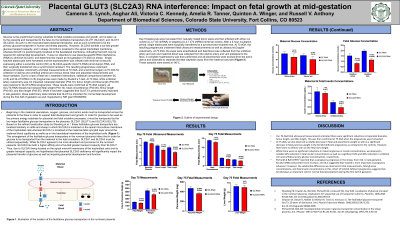 Glucose is the predominant energy substrate for fetal oxidative processes and growth, and is taken up by the placenta and transported to the fetus by the facilitative transporters GLUT1 (SLC2A1) and GLUT3 (SLC2A3). SLC2A1 is the most abundant placental transporter, and as such is believed to be the primary glucose transporter in human and sheep placenta. However, SLC2A3 exhibits a six-fold greater glucose transport capacity, and in sheep, SLC2A3 is localized to the apical trophoblast membrane, whereas SLC2A1 is predominantly localized to the basolateral membrane, indicating that both may be required for optimal fetal development. It was our objective to use placenta-specific RNA interference (RNAi) to diminish SLC2A3, and determine the impact at mid-gestation (75 dGA) in sheep. Single hatched blastocysts were harvested and the trophectoderm was infected with lentiviral constructs expressing either a scramble control (SC) or SLC2A3-specific (GLUT3-RNAi) short-hairpin RNA, and then surgically transferred into a synchronized recipient. The resulting pregnancies underwent ultrasound Doppler velocimetry and fetal measurements at 70 dGA, and a terminal surgery at 75 dGA for collection of uterine and umbilical arterial and venous blood, fetal and placental measurements and tissue samples. Due to a lack of fetal sex x treatment interactions, statistical comparisons between SC (n = 6) and GLUT3-RNAi (n = 6) pregnancies were made by Student’s T-test. At 70 dGA, while umbilical artery velocimetry was not impacted, biparietal diameter (P ≤ 0.10), femur length and tibia length (P ≤ 0.05) were reduced in GLUT3-RNAi pregnancies. These results were confirmed at 75 dGA surgery, as GLUT3-RNAi fetuses had reduced fetal weight (P ≤ 0.10), head circumference (P ≤ 0.05), femur length (P ≤ 0.05), and tibia length (P ≤ 0.05). While it has been suggested that GLUT3 is predominantly important in late gestation, these preliminary data indicate that GLUT3 is important for normal fetal development during the first-half of gestation as well. Supported by NIH grant HD094952.