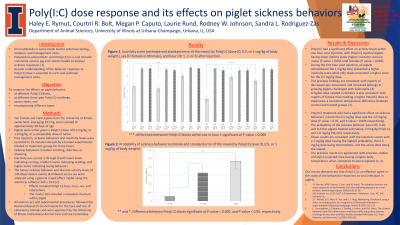 The synthetic polyinosinic-polycytidylic acid Poly(I:C) is commonly used to mimic viral infection in rodents. A Poly(I:C) injection activates inflammatory receptors that recognize viral patterns. This immune-stimulating agent can be used to understand the effects of viral infection on pork production.  The objective of this study was to compare the effects of multiple Poly(I:C) doses on sickness behaviors across time.  Female and male pigs from the University of Illinois Swine herd, averaging 24.5 kg, were injected with 1 mg/kg or 0.5 mg/kg of Poly(I:C), or comparable volume of Saline at approximately 60 days of age. Post injection, sickness behaviors and activity levels were measured in 15-minute intervals by a trained experimenter for three hours. Observed sickness behaviors included vomiting, diarrhea, or shivering. The activity levels were scored 1 through 8 with lower levels indicating pigs running, medium levels indicating walking, and higher levels indicating laying behaviors. The binary sickness behavior and discrete activity levels from 130 observations from 10 pigs evenly distributed across sexes were analyzed using generalized mixed effect models. The model included the effects of Poly(I:C) dose, hour, sex, and interactions, and a repeated structure within pig. The administration of Poly(I:C) had a significant effect on activity level within one hour post-injection, and Poly(I:C)-treated pigs had lower activity levels than the Saline group. The Poly(I:C) effect had a lower significance in males (P < 0.001) than females (P < 0.004). The Poly(I:C) treatment also had a significant effect on the probability of sickness behavior (P < 0.005). The probability of sickness behavior was 0.03, 0.18, and 0.23 for pigs treated with Saline, 0.5, and 1.0 mg/kg of Poly(I:C), respectively. Our results suggest that Poly(I:C) could be an effective agent in studying sickness response to viral infections in pigs. This study is supported by USDA NIFA AFRI, grant number 2018-67015-27413.