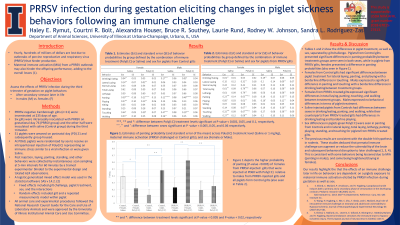 The pork industry faces financial losses associated with outbreaks in porcine reproductive and respiratory virus (PRRSV). One type of loss stems from the effect of PRRSV-elicited maternal immune activation during gestation on the response of pigs to a second immune challenge later in life. The objective of this study was to assess the effects of PRRSV infection during gestation, a second immune challenge, and sex on pig behavior. Camborough gilts were inoculated with PRRSV or saline (Controls) during the last third of gestation. The piglets from these gilts were weaned at day 21, and were injected with Poly(I:C) to elicit a second immune challenge, similarly to a viral infection, or with Saline on day 60. Post injection, behaviors were recorded in 5-minute intervals for one hour by a trained experimenter. Recorded behaviors included laying, standing, and panting, and totaled 624 observations per behavior on 51 pigs from 10 gilts. The logistic generalized mixed effect model used to describe behavior included the effects of gilt and pig treatments, sex, and interactions, and accounted for the random effect of gilt, and repeated measurements within pig. Panting showed a significant gilt challenge-by-sex-by-pig treatment interaction effect (P < 0.031).  The Poly(I:C) challenge had a significant and positive effect on panting among male pigs from Control gilts (P < 0.001), while this effect was not observed in pigs from PRRSV-treated gilts. Among female pigs challenged with Poly(I:C), PRRSV treatment has a significant effect on  lateral laying (P < 0.015) and standing (P < 0.042). Pigs from PRRSV-treated gilts were less active than from Control gilts. Our results highlight that the effect on behaviors of immune challenge later in life depend on the exposure of pigs to PRRSV during gestation. This study is supported by USDA NIFA AFRI, grant number 2018-67015-27413.