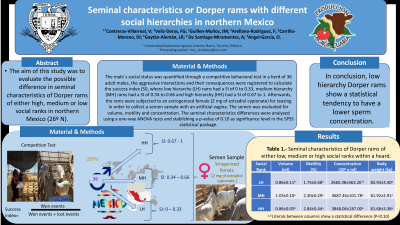 The aim of this study was to evaluate the possible difference in seminal characteristics of Dorper rams of either high, medium or low social ranks in northern Mexico (26º N). The male's social status was quantified through a competitive behavioral test in a herd of 36 adult males, the aggressive interactions and their consequences were registered to calculate the success index (SI), where low hierarchy (LH) rams had a SI of 0 to 0.33, medium hierarchy (MH) rams had a SI of 0.34 to 0.66 and high hierarchy (HH) had a SI of 0.67 to 1. Afterwards, the rams were subjected to an estrogenized female (2 mg of estradiol cypionate) for teasing in order to collect a semen sample with an artificial vagina. The semen was evaluated for volume, motility and concentration. The seminal characteristics differences were analyzed using a one-way ANOVA tests and stablishing a p-value of 0.10 as significance level in the SPSS statistical package. Results are shown in table 1. In conclusion, low hierarchy Dorper rams show a statistical tendency to have a lower sperm concentration.