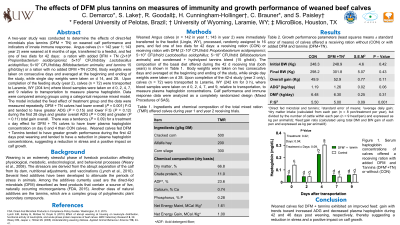 A two-year study was conducted to determine the effects of direct-fed microbials plus tannins (DFM + TN) on weaned calf performance and indicators of innate immune response. Angus calves (n = 142 year 1; 143 year 2) were weaned at 6 months of age, transferred to a feedlot, and fed one of two diets for 42 days: a ration with added DFM + TN (2×108 Propionibacterium acidipropionici; 5×107 CFU/hd/day Lactobacillus animalis; 5×107 CFU/hd/day Bifidobacterium animalis; and tannins 15 g/hd/day) or a ration with no added DFM +TN (CON). Body weights were taken on consecutive days and averaged at the beginning and ending of the study, while single day weights were taken on d 14, and 28. Upon completion of the feeding study (year 2), calves (n = 72) were transported to Laramie, WY (204 km), where blood samples were taken on d 0, 2, 4, 7, and 9 relative to transportation to measure plasma haptoglobin. Data were compared among groups using a categorical response mixed model. The model included the fixed effect of treatment group and the data were measured repeatedly. DFM + TN calves had lower overall (P = 0.001) F:G and tended to have greater ADG (P = 0.15) and lower F:G (P = 0.12) during the first 28 days and greater overall ADG (P = 0.06) and greater (P = 0.11) total gain overall. There was a tendency (P = 0.09) for a treatment x day effect for DFM + TN calves to have lower plasma haptoglobin concentration on day 0 and 4 than CON calves. Weaned calves fed DFM + Tannins tended to have greater growth performance during the first 42 days post weaning and tended to have a reduction in plasma haptoglobin concentrations, suggesting a reduction in stress and a positive impact on calf growth.