PSIV-29 - The effects of Saccharomyces cerevisiae fermentation product on the performance of creep fed Boer cross kids in regards to average daily gain and weaning weights on alfalfa and grain supplementation. 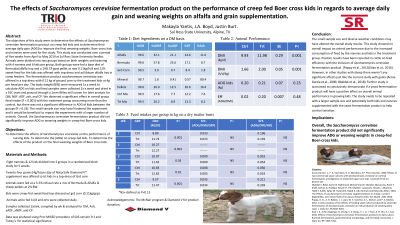 The objectives of this study were to determine the effects of Saccharomyces cerevisiae fermentation product on creep fed kids and to determine their average daily gain (ADG) to improve the final weaning weights. Boer-cross kids and nannies were used for the study. This study was conducted over a period of five weeks from April to May 2019 at Sul Ross State University feedlot. Animals were divided into two groups based on birth weights and twinning with 4 nannies and 6 kids per group. Both groups were fed a base diet of Bermuda/alfalfa hay and a 14% CP goat pellet at rate 0.11kg/h/d and 12% sweet feed for the kids was offered with top-dress and ad libitum alfalfa hay in creep feeders. The fermentation product Saccharomyces cerevisiae was offered in a top-dress with 0.11 kg of ground corn to the treatment kids at 4g per head per day. The body weight (BW) were measured 1x a week to calculate ADG on kids and feed samples were collected 2x a week and dried in a 55C oven and ground through a 1mm Wiley mill screen for later analysis for DM, NDF, ADF, ash, and CP. We observed a significant effect in overall group feed intake (P < 0.001) with the treatment group consuming more than the control, but there was not a significant difference in ADG of kids between the groups (P > 0.23). The small sample size may have hindered the experiment, and it would be beneficial to repeat the experiment with a larger number of animals. Overall, the Saccharomyces cerevisiae fermentation product did not significantly improve ADG or weaning weights in creep-fed Boer-cross kids.