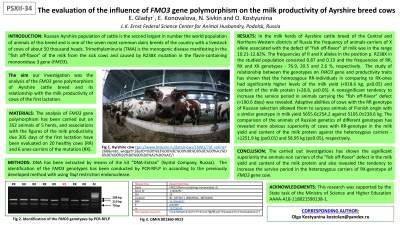 Russian Ayrshire population of cattle is the second largest in number the world population of animals of this breed. Trimethylaminuria (TMA) is the monogenic disease manifesting in the ''fish off-flavor" of the milk from the sick cows and caused by R238X mutation in the flavin-containing monooxidase 3 gene (FMO3). The aim of our investigation was the analysis of the FMO3 gene polymorphism of Ayrshire cattle breed and its relationship with the milk productivity of the first lactation. The analysis of FMO3 gene polymorphism has been carried out on 352 animals of 5 herds, and associations with the milk productivity due 305 days have been evaluated on 20 healthy cows (RR) and 6 ones-carriers of the mutation (RX). DNA has been extracted by means of the kit “DNA-Extran” ("Syntol", Russia). The identification of the FMO3 genotypes has been conducted by PCR-RFLP in according to the previously developed method with using TaqI restriction endonuclease. The frequency of animals-carriers of X allele associated with the defect of "fish off-flavor" of milk was in the range 10.21-12.82%. The frequencies of RR, RX and XX genotypes were 76.9, 20.5 and 2.6 %, respectively. The study of relationship between the genotypes on FMO3 gene and productivity traits has shown that the homozygous RR-individuals in comparing to RX-ones had significantly higher levels of the milk yield (+918.6 kg, P ≥ 0.05) and content of the milk protein (+28.8, P ≥ 0.05). Adaptive abilities of RR-cows of Russian selection allowed them to surpass animals of Finnish origin with a similar genotype in milk yield 5,655.6 ± 254.2 against 5,105.0 ± 238.6 kg. The investigations has shown the significant superiority the animals-non carriers of the "fish off-flavor" defect in the milk yield and content of the milk protein. This research was supported by the Ministry of science and higher education АААА-А18-118021590138-1.