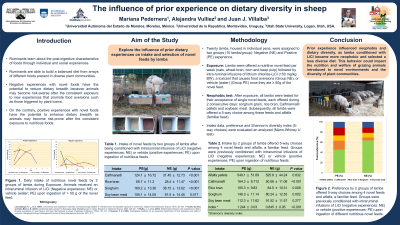 The objective of this study was to explore the influence of prior dietary experiences on intake and selection of novel feeds by lambs. Twenty lambs housed in individual pens were assigned to two groups (10lambs/group): Negative (NE) and Positive (PE) Experiences, in a split-plot design. Lambs were offered a nutritive novel feed followed by intra-ruminal infusions of lithium chloride-LiCl (150 mg/kg BW), a toxicant that causes food aversions (NE), or vehicle (water; PE). The feed was offered daily and infusions were delivered only when intake was ≥50g, when the protocol was repeated with another novel feed until 4 feeds (oats, wheat bran, corn, beep pulp) were offered. After exposure, all lambs were tested for their acceptance of single novel feeds, each offered during 2 consecutive days: sorghum grain, rice bran, Calfmanna® pellets and soybean meal. Subsequently, all lambs were offered a 5-way choice among these feeds and alfalfa (familiar feed). Intake data, preference and Shannon’s diversity index (5-way choices) were analyzed with a Mann-Whiney U test. During exposure, the NE group ate less of the 4 feeds than the PE group (P < 0.05). Moreover, as exposure progressed, it took more days for NE lambs to reach the 50 g intake threshold, suggesting that neophobia in this group increased with negative experiences. During testing, NE lambs ate less (P < 0.05) of the novel feeds, except soybean meal, than the PE lambs. During the 5-way-choice test, preference for alfalfa was 63.6±3.5% for NE and 45.2±2.6% for PE (P < 0.001). The Shannon’s index was 0.85±0.05 for NE and 1.24±0.03 for PE (P < 0.001), suggesting that lambs in NE selected a less diverse diet. Thus, prior experience influenced neophobia and dietary diversity, an outcome that could impact the nutrition and welfare of grazing animals introduced to novel environments and the diversity of plant communities.