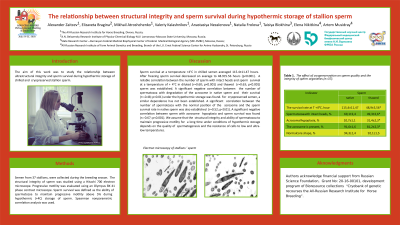 The aim of this work was to study the relationship between ultrastructural integrity and sperm survival during hypothermic storage of chilled and cryopreserved stallion sperm. Semen from 37 stallions, were collected during the breeding season. The structural integrity of sperm was studied using a Hitachi 700 electron microscope. Progressive motility was evaluated using an Olympus BX 41 phase contrast microscope. Sperm survival was defined as the ability of spermatozoa to maintain progressive motility above 5% during hypothermic (+4C) storage of sperm. Spearman nonparametric correlation analysis was used. Sperm survival at a temperature +4°C in chilled semen averaged 115.4±11.47 hours. After freezing sperm survival decreased on average to 48.9±5.56 hours (P < 0.001). A reliable correlation between the number of sperm with intact heads and sperm survival at a temperature of + 4°C in diluted (r=0.60; P < 0.001) and thawed (r=0.63; P < 0.001) sperm was established. A significant negative correlation between the number of spermatozoa with degradation of the acrosome in native sperm and their survival (r=-0.48; P < 0.01) under the hypothermic storage was found. For cryopreserved semen, a similar dependence has not been established. A significant correlation between the number of spermatozoa with the normal position of the acrosome and the sperm survival rate in native sperm was also established (r=0.52; P < 0.01). A significant negative correlation between sperm with acrosome hypoplasia and sperm survival was found (r=-0.67; P < 0.001). We assume that the structural integrity and ability of spermatozoa to maintain progressive motility for a long time under conditions of hypothermic storage depends on the quality of spermatogenesis and the resistance of cells to low and ultra-low temperatures. Authors acknowledge financial support from Russian Science Foundation, Grant No: 20-16-00101, development program of Bioresource collections “Cryobank of genetic recourses the All-Russian Research Institute for Horse Breeding."