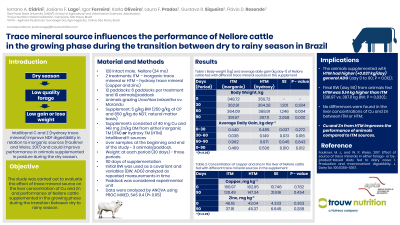 The relative bioavailability of trace minerals may vary between the sources and impact the animal performance. The study was carried out to evaluate the effect of TM source (Cu and Zn) on the liver concentration and performance of Nellore cattle supplemented in the growing phase during the transition between dry to rainy season. A hundred and twenty Nellore young bulls (BW = 349.72 ± 24 kg; 24 months), blocked by BW, were assigned randomly to twelve paddocks (six paddocks/treatment and 10 animals/paddock). Animals grazing Urochloa brizantha cv. Marandu and supplemented at 5 g/kg BW with soybean meal, corn and mineral mix (250 g/kg of CP and 650 g/kg de NDT, natural matter basis). Supplements consisted of 40 mg Cu and 148 mg Zn/kg DM from either inorganic TM (ITM) or hydroxy TM (HTM) Intellibond® sources. Liver samples were collected at the beginning and end of the study (three animals per paddock). Animals were weighed at each period (30 days) during three periods. Period was used as a REPEATED measurement for BW and values of initial BW as independent covariates for all variables. Paddock was considered experimental unit. Data were analyzed by ANOVA using PROC MIXED, SAS 9.4. The animals supplemented with HTM had higher (+0.037 kg/day) general ADG (day 0 to 90; P = 0.012), with 0.469 and 0.506 kg/day to ITM and HTM, respectively. Final BW (day 90) from animals fed HTM was 5.13 kg higher than ITM (391.97 vs. 397.11 kg BW; P = 0.030). No differences were found in the liver concentrations of Cu and Zn between ITM or HTM (P ≥ 0.288). Cu and Zn from HTM improve the performance of animals supplemented in pasture compared to ITM sources.