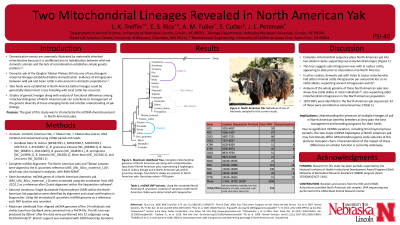 Domestic yak (Bos grunniens) are bovids native to the Asian Qinghai-Tibetan Plateau. Studies of Asian yak have revealed that introgression with domestic cattle has contributed to the evolution of the species. When imported to North America (NA), some hybridization with B. taurus did occur. The objective of this study was to use mitochondrial (mt) DNA sequence data to better understand the mtDNA origin of NA yak and their relationship to Asian yak and related species. The complete mtDNA sequence of 14 individuals (12 NA yak, 1 Tibetan yak, 1 Tibetan B. indicus) was generated and compared with sequences of similar species from GeneBank (B. indicus, B. grunniens (Chinese), B. taurus, B. gaurus, B. primigenius, B. frontalis, Bison bison, and Ovis aries). Individuals were aligned to the B. grunniens reference genome (ARS_UNL_BGru_maternal_1.0), which was also included in the analyses. The mtDNA genes were annotated using the ARS-UCD1.2 cattle sequence as a reference. Ten unique NA yak haplotypes were identified, which a haplotype network separated into two clusters. Variation among the NA haplotypes included 93 nonsynonymous single nucleotide polymorphisms. A maximum likelihood tree including all taxa was made using IQtree after the data were partitioned into twenty-two subgroups using PartitionFinder2. Notably, six NA yak haplotypes formed a clade with B. indicus; the other four haplotypes grouped with B. grunniens and fell as a sister clade to bison, gaur and gayal. These data demonstrate two mitochondrial origins of NA yak with genetic variation in protein coding genes. Although these data suggest yak introgression with B. indicus, it appears to date prior to importation into NA. In addition to contributing to our understanding of the species history, these results suggest the two major mtDNA haplotypes in NA yak may functionally differ. Characterization of the impact of these differences on cellular function is currently underway.