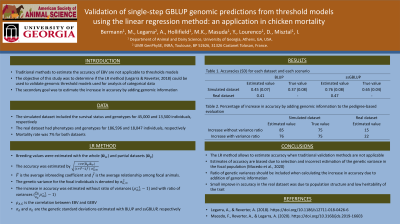 The objective of this study was to determine whether the linear regression (LR) method could be used to validate genomic threshold models used for analysis of categorical data. Statistics for the LR method were computed from estimated breeding values (EBVs) using the whole and truncated datasets. The method was tested using simulated and real chicken datasets. The simulated dataset included ten generations of 4,500 birds each; genotypes were available for the last three generations. Each animal was assigned a continuous trait, which was converted to a binary score assuming an incidence of failure of 7%. The real dataset included the survival status of 186,596 broilers (mortality rate equal to 7.2%) and genotypes of 18,047 birds. Both datasets were analyzed using Best Linear Unbiased Predictor (BLUP) or single-step GBLUP (ssGBLUP). The whole dataset included all phenotypes available, whereas in the partial dataset, phenotypes of the most recent generation were removed. In the simulated dataset, the accuracies based on the LR formulas were 0.45 for BLUP and 0.76 for ssGBLUP, whereas the correlations between true breeding values and EBVs were 0.37 and 0.65, respectively. The gain in accuracy by adding genomic information was overestimated by 0.09 when using the LR method compared to the true increase in accuracy. However, when the estimated ratio between the additive variance computed based on pedigree only and on pedigree and genomic information was considered, the difference between true and estimated gain was less than 0.02. Accuracies of BLUP and ssGBLUP with the real dataset were 0.41 and 0.47, respectively. Smaller improvements in accuracy when using ssGBLUP with the real dataset were due to population structure and lower heritability. The LR method is a useful tool for estimating improvements in accuracy of EBVs due to the inclusion of genomic information when traditional validation methods are not applicable.