PSIII-1 - Activity of nucleolar organizers depending on genotype 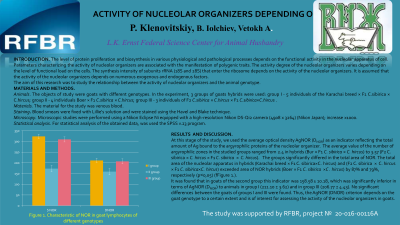 The level of protein proliferation and biosynthesis in various physiological and pathological processes depends on the functional activity in the nucleolar apparatus of cell. The activity degree of the nucleolar organizers varies depending on the level of functional load on the cells. It is associated with the exogenous and endogenous factors and the manifestation of polygenic traits, such as the synthesis intensity of subunits rRNA (18S and 28S) that enter the ribosome. The aim of this research was to study the relationship between the activity of nucleolar organizers and the animal genotype. The objects of study were goats with different genotypes divided by 3 groups of goats hybrids were used: group_I was 5 individuals of  Karachay × F1(C.sibirica×C.hircus); group_II - 4 individuals of Boer × F1; group_III - 3 individuals of F2(C.sibirica×C.hircus) × F1. The material for the study was venous blood. Blood smears were fixed with Lillie's solution and were stained using the Havel and Blake technique. Microscopic studies were performed using a Nikon Eclipse Ni equipped with Nikon DS-Qi2 camera (4908×3264). For statistical analysis of the obtained data, the SPSSv.23 was used. We used the average optical density AgNOR (DNOR) as an indicator reflecting the total amount of Ag bound to the argyrophilic proteins of the nucleolar organizer, It was found that in goats of the second group this indicator was 158.58±10.18, which was significantly inferior in terms of AgNOR to animals in group_I (211.10±3.62) and in group_III (206.77±4.43). No significant differences between the goats of groups I and III were found. Thus, the AgNOR criterion depends on the goat genotype to a certain extent and is of interest for assessing the activity of the nucleolar organizers in goats. Supported by RFBR project №20-016-00116А and the Ministry of Science and Higher Education of Russia (№АААА-А18-118021590132-9).