PSX-30 - Late-Breaking Abstract: Genotypes database of pedigree cattle population in Kazakhstan and the introduction of a calculating mechanism for livestock parentage verification 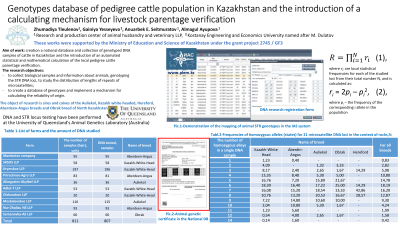 A significant increase in pedigree cattle in Kazakhstan has led to scientific work on the conservation of breed genotypes in Kazakhstan and the development of imported breeds. Aim of work: creation a national database and collection of genotyped DNA samples of cattle in Kazakhstan and the introduction of an automated statistical and mathematical calculation of the local pedigree cattle parentage verification. The methodology of work has been the selection of biological samples and registration of data on the animal. DNA and STR locus testing have been performed at the University of Queensland's Animal Genetics Laboratory (Australia). DNA genotyping was carried out using 21 polymorphic dinucleotide microsatellite loci. The database of DNA genotypes of breeding animals has been written and introduced into the database of breeding livestock in Kazakhstan (www.plem.kz). The method of determining kinship and confirming the origin of the animal was implemented by calculating the probability of random coincidence of genetic markers, taking into account their distribution in the population according to the "product rule." The frequency distribution of homozygous alleles for 12 microsatellite loci (table 1) recommended by ICAR and 21 DNA loci (table 2) in the context of breeds was calculated, which indicates an increase in reliability when calculating the origin of livestock, with an increase in the number of microsatellite loci studied to 21 markers. The lower probability threshold is established, with 95% statistical significance confirms the relationship between the compared animals (table 3). A database of genotyped DNA samples of beef and dairy cattle breeds in Kazakhstan has been created and is currently used in pedigree beef cattle breeding. Access to the DNA database is provided to Kazakhstan genetic laboratories, and an automated calculation of the mathematical probability of parentage verification for a breeding animal and the generation of a genetic certificate was introduced on the website www.plem.kz