PSVIII-37 - Late-Breaking Abstract: Effects of feeding a vitamin and mineral supplement and (or) an energy supplement on the abundance of SLC7A5 transporter in beef heifer placentomes at d 83 of gestation 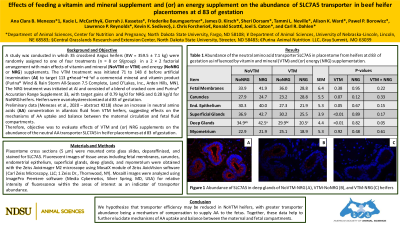 Objectives were to evaluate effects of vitamin and mineral (VTM) and (or) energy (NRG) supplements on the abundance of the neutral amino acid (AA) transporter SLC7A5 in heifer placentomes at d 83 of gestation. Thirty-five crossbred Angus heifers (Body weight = 359.5 ± 7.1 kg) were randomly assigned to one of four treatments (n = 8 or 9/group) in a 2 × 2 factorial arrangement with main effects of vitamin and mineral (NoVTM or VTM) and energy (NoNRG or NRG) supplements. The VTM treatment was initiated 71 to 148 d before artificial insemination (AI). The NRG treatment was initiated at AI. Heifers were ovariohysterectomized at d 83 of gestation. Placentome cross sections (5 μm) were mounted onto glass slides, deparaffinized, and stained for SLC7A5. Fluorescent images of tissue areas including fetal membranes, caruncles (CAR), endometrial epithelium (EP), superficial glands (SG), deep glands (DG), and myometrium were obtained and analyzed for relative intensity of fluorescence within the areas of interest as an indicator of transporter abundance. The abundance of SLC7A5 was influenced by a VTM × NRG interaction (P = 0.05) in DG, with NoVTM-NRG being greater than heifers receiving VTM. Abundance of SLC7A5 was not influenced by NRG (P > 0.12) in any structures evaluated. In EP and SG abundance of SLC7A5 was less (P ≤ 0.05) in VTM than NoVTM heifers and tended to be less in CAR (P = 0.07). Our previous work revealed no differences in maternal serum AA concentrations, but VTM heifers had greater AA concentrations in allantoic fluid than NoVTM. We hypothesize that transporter efficiency may be reduced in NoVTM heifers, with greater transporter abundance being a mechanism of compensation to supply AA to the fetus. Together, these data help to further elucidate mechanisms of AA uptake and balance between the maternal and fetal compartments.