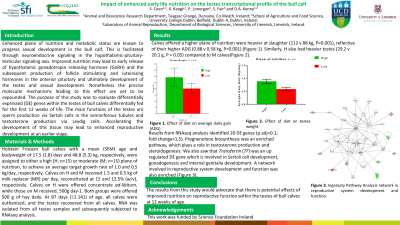 Enhanced plane of nutrition and metabolic status are known to progress sexual development in the bull calf. This is facilitated through neuroendocrine signaling in the hypothalamic-pituitary-testicular signaling axis. Improved nutrition may lead to early release of hypothalamic gonadotropin releasing hormone (GnRH) and the subsequent production of follicle stimulating luteinizing hormones in the anterior pituitary and ultimately development of the testes and sexual development. Nonetheless the precise molecular mechanisms leading to this effect are yet to be expounded. The purpose of this study was to evaluate differentially expressed (DE) genes within the testes of bull calves differentially fed for the first 12 weeks of life. The main functions of the testes are the biosynthesis of androgens by the leydig cells and sperm production by the seminiferous tubules. Accelerating the development of this tissue may lead to enhanced reproductive development at an earlier stage. Holstein Friesian bull calves with a mean (SEM) age and bodyweight of 17.5 (2.8) days and 48.8 (5.3) kg, respectively, were assigned to either a high (H; n = 15) or moderate (M; n = 15) plane of nutrition, to achieve an average target growth rate of 1.0 and 0.5 kg/day, respectively. Calves on H and M received 1.5 and 0.5 kg of milk replacer (MR) per day, reconstituted at 15 and 12.5% (w/v), respectively. Calves on H were offered concentrate ad libitum, while those on M received, 500g day-1. Both groups were offered 500 g of hay daily. At 87 days (±2.141) of age, all calves were euthanized and the testes recovered from all calves. RNA was isolated from all testes samples and subsequently subjected to RNAseq analysis. Calves offered a higher plane of nutrition were heavier at slaughter (112 v 88 kg, P < 0.001), reflective of their higher ADG (0.88 v 0.58 kg, P < 0.001). Similarly, H also had heavier testes (29.2 v 20.1 g, P < 0.05) compared to M calves. Results from RNAseq analysis identified 27 DE genes (p.adj< 0.1; fold change >1.5). Cholesterol biosynthesis was an enriched pathway and reproductive system development was also affected. We also saw that Claudin11 was an up regulated DE gene which is involved in sertoli cell development. The results from this study would advocate that there is potential effects of improved nutrition on reproductive function within the testes of bull calves at 12 weeks of age.