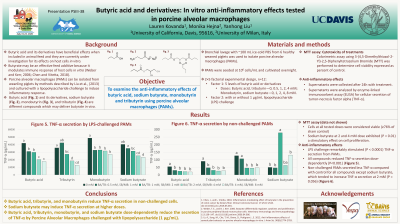 The aim of this experiment was to examine the anti-inflammatory effects of butyric acid, sodium butyrate, monobutyrin and tributyrin using porcine alveolar macrophages (PAMs). PAMs were isolated from the bronchial lavage of 6 piglets at 6 weeks of age, and then seeded at 106 cells/mL in 24-well plates. After 24 h incubation, cells were treated with different treatments in a randomized complete block design with 10 replicates. The treatments were in a factorial arrangement with 2 doses of lipopolysaccharide (LPS, 0 or 1 μg/mL) and 5 levels of organic acid (0, 0.5, 1, 2, 4 mM for butyric acid and tributyrin and 0, 1, 2, 4, 8 mM for sodium butyrate and monobutyrin). Supernatants were collected after another 24 h incubation and analyzed for tumor necrosis factor alpha (TNF-α). Cell viability was also tested by the MTT assay. Data were analyzed using the MIXED procedure of SAS. No cytotoxic effect was observed in LPS challenge and each organic acid with the percentage of live cells was more than 76% in comparison to the sham control. Sodium butyrate at 2 and 4 mM dose exhibited (P < 0.01) a stimulatory effect on cell proliferation. LPS challenge remarkably stimulated (P < 0.0001) TNF-α secretion from PAMs. In the non-challenge group, butyric acid, monobutyrin, and tributyrin linearly reduced TNF-α production from PAMs, whereas 2 mM sodium butyrate tended to increase (P = 0.056) TNF-α secretion from PAMs. In the LPS challenge group, all tested organic acid dose-dependently reduced (P < 0.001) TNF-α production from LPS-challenged PAMs, with the strongest inhibiting effect observed at the highest dose. Results indicated that butyric acid and its derivatives that were tested in the current experiment all had strong anti-inflammatory activities in vitro.