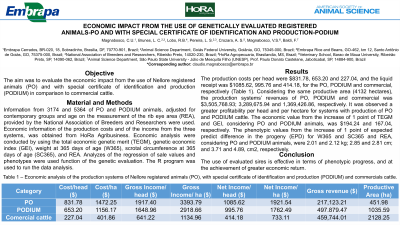 The aim was to evaluate the economic impact from the use of Nellore registered animals (PO) and with special certificate of identification and production (PODIUM) in comparison to commercial cattle. Information from 3174 and 5364 of PO and PODIUM animals, adjusted for contemporary groups and age on the measurement of the rib eye area (REA), provided by the National Association of Breeders and Researchers were used. Economic information of the production costs and of the income from the three systems, was obtained from HoRa Agribusiness. Economic analysis were conducted by using the total economic genetic merit (TEGM), genetic economic index (GEI), weight at 365 days of age (W365), scrotal circumference at 365 days of age (SC365), and REA. Analyzes of the regression of sale values and phenotypes were used function of the genetic evaluation. The R program was used to run the data analysis. The production costs per head were $831.78, 653.20 and 227.04, and the liquid receipt was $1085.62, 995.76 and 414.18, for the PO, PODIUM and commercial, respectively (Table 1). Considering the same productive area (4132 hectares), the production systems’ revenues of PO, PODIUM and commercial was $3,505,768.93; 3,289,675.94 and 1,369,426.86, respectively. It was observed a greater profitability per head and per hectare for systems with production of PO and PODIUM cattle. The economic value from the increase of 1 point of TEGM and GEI, considering PO and PODIUM animals, was $194.24 and 167.04, respectively. The phenotypic values from the increase of 1 point of expected predict difference in the progeny (EPD) for W365 and SC365 and REA, considering PO and PODIUM animals, were 2.01 and 2.12 kg; 2.85 and 2.81 cm; and 3.71 and 4.89, cm2, respectively. The use of evaluated sires is effective in terms of phenotypic progress, and at the achievement of greater economic return.