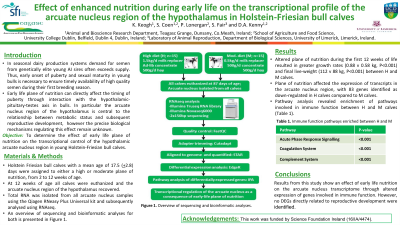 Improved nutrition and metabolic status during early life are known to advance sexual development in the bull calf. This is mediated through complex neuroendocrine signaling at the level of the hypothalamic-pituitary-testicular (HPT) axis resulting in precocious testicular development and spermatogenesis. The arcuate nucleus region (ARC) of the hypothalamus is centrally involved in the integration of peripheral metabolic cues with GnRH neuronal function and gonadotropin pulsatility which in turn stimulate testicular development. However the precise molecular mechanisms regulating the influence of prevailing nutritional status on hypothalamic function are yet to be fully elucidated. The objective of this study was to evaluate differentially expressed genes (DEG) within the ARC of bull calves offered contrasting planes of nutrition during the first 12 weeks of life, to coincide with the characteristic transient gonadotropin rise. Holstein-Friesian bull calves with a mean (+SD) bodyweight and age of 48.8(5.3) kg and 17.5(2.8) days, respectively, were assigned to either a high energy (H; n = 15) or moderate energy (M; n = 15) plane of nutrition designed for growth rates of 1.0 and 0.5 kg/day, respectively. At 12 weeks of age all calves were euthanized and the ARC harvested. RNA was isolated from all ARC samples and RNAseq analysis conducted. As expected, H calves were heavier at euthanasia (H=112 kg; M=88 kg, P < 0.001). RNAseq analysis resulted in the identification of 83 DEG (P.adj< 0.1; fold change >1.5), all of which were down-regulated in H compared to M calves. DEG were enriched for biological pathways associated with immune function including complement system and acute phase response signaling (P.adj< 0.01). However no DEG identified were directly involved in reproductive developmental processes. Results from this study suggest that the typically positive effect of enhanced nutrition on reproductive development may not be apparent within the ARC at 12 weeks of age.