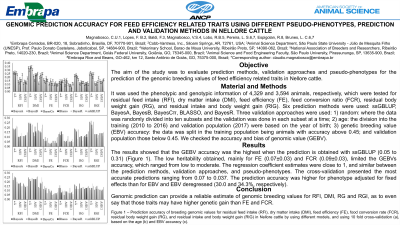 The aim of the study was to evaluate prediction methods, validation approaches and pseudo-phenotypes for the prediction of the genomic breeding values of feed efficiency related traits in Nellore cattle. It used the phenotypic and genotypic information of 4,329 and 3,594 animals, respectively, which were tested for residual feed intake (RFI), dry matter intake (DMI), feed efficiency (FE), feed conversion ratio (FCR), residual body weight gain (RG), and residual intake and body weight gain (RIG). Six prediction methods were used: ssGBLUP, BayesA, BayesB, BayesCπ, BLASSO, and BayesR. Three validation approaches were used: 1) random: where the data was randomly divided into ten subsets and the validation was done in each subset at a time; 2) age: the division into the training (2010 to 2016) and validation population (2017) were based on the year of birth; 3) genetic breeding value (EBV) accuracy: the data was split in the training population being animals with accuracy above 0.45; and validation population those below 0.45. We checked the accuracy and bias of genomic value (GEBV). The results showed that the GEBV accuracy was the highest when the prediction is obtained with ssGBLUP (0.05 to 0.31) (Figure 1). The low heritability obtained, mainly for FE (0.07 ± 0.03) and FCR (0.09 ± 0.03), limited the GEBVs accuracy, which ranged from low to moderate. The regression coefficient estimates were close to 1, and similar between the prediction methods, validation approaches, and pseudo-phenotypes. The cross-validation presented the most accurate predictions ranging from 0.07 to 0.037. The prediction accuracy was higher for phenotype adjusted for fixed effects than for EBV and EBV deregressed (30.0 and 34.3%, respectively). Genomic prediction can provide a reliable estimate of genomic breeding values for RFI, DMI, RG and RGI, as to even say that those traits may have higher genetic gain than FE and FCR.