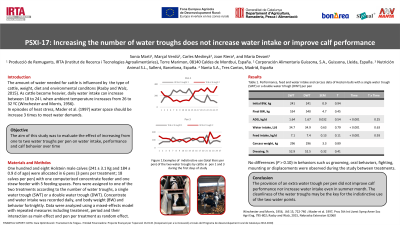 Provision of adequate quantity of water is essential for cattle as it can affect their health and growth. In addition, during summer months, the amount of water that calves can drink may double, limiting water access. One hundred and eight Holstein male calves (241 ± 3.1 Kg and 184 ± 0.9 d of age) were used in a randomized design to evaluate the effect of increasing from one to two water troughs per pen on water intake, performance and calf behavior over time. Calves were allocated in 6 pens (3 pens per treatment; 18 calves per pen) with one computerized concentrate feeder and one straw feeder with 5 feeding spaces. Pens were assigned to one of the two treatments according to the number of water troughs, a singles water trough (SWT) or a double water trough (DWT). Concentrate and water intake was recorded daily, and body weight (BW) and behavior fortnightly. Data were analyzed using a mixed-effects model with repeated measures including treatment, period and their interaction as main effect and pen per treatment as random effect. Final BW, average daily gain, water and concentrate intake were not affected by the number of water trough in the pen, as well as carcass weight and dressing percentage. However, water intake increased (P < 0.001) by period with an average water intake per calf of 21 L/day in calves with 241 d of age in February, to 51 L/day in calves with 409 d of age in August. Sexual and agonistic behaviors such as grooming, oral non-nutritive behaviors, fighting and mounting did not differ between treatments. The provision of an extra water trough per pen did not improve calf performance nor increase water intake even in summer month.