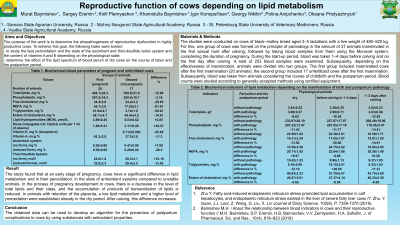 The aim of the study was to determine the etiopathogenesis of reproductive dysfunction in highly productive cows. Studies were conducted on cows of black-motley breed, aged 3-5 lactations, with a live weight of 480–520 kg. Cows were divided into two groups. The first group included 20 cows effective inseminated after the first insemination. The second group included 17 cows that did not fertilize after the first insemination. Blood samples (n = 253) were taken from 4–7; 14–17; 24–34; 35–50; 88–95; 195–210 days of pregnancy; during the beginning of dry period (DP); 1–4 days before calving and on the first day after calving. The content of total serum lipids in pregnant animals was 15.8% higher compared to unfertilized animals. In non-pregnant cows, a decrease in free cholesterol (by 28.65%), especially in its ether-bound fraction (14.91%), indicates a lower synthetic function of the liver, which is confirmed by the low serum levels of vitamins A and E (a difference of 11.3 and 23.65%). The DP was characterized by a significant increase in the products of lipid peroxidation - malondialdehyde by 12–17%, diene and triene conjugates - by 10–15 and 8–15%, respectively, and 1–4 days before calving in cows, which subsequently had a pathological calving, in particular - retention of  placenta (5 cows), were characterized by an increased content in the blood plasma of lipid peroxidation products. Thus, the difference in the number of dienes, trienes, and malondialdehyde products was 14.0, 12.0, and 23.5%, compared with animals without obstetric pathology. On the first day after calving, this difference increased even more. Cows with retention of placenta had a significantly higher level of lipid peroxidation products and were characterized by a predominance of oxidized products over the antiradical thiol disulfide and ascorbate systems restored in the antioxidant balance.