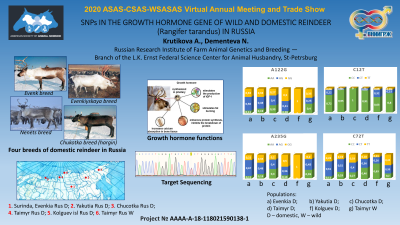 In the northern part of Russia, there are wild and domestic reindeer. There are four breeds of domestic reindeer in Russia: Nenets, Evenki, Even and Chukchi. The breeds are adapted to various climatic zones of habitat (tundra or taiga). Breeds vary in growth and live weight, as well as in areas of application. The aim was to study the polymorphism of the gene for growth hormone in the reindeer. The DNA was extracted by the phenolic method using the standard method using proteinase K from blood and tissues. Specially designed primers were used to amplify the site of growth hormone gene. As a result of amplification, a 422 bp fragment was obtained covering the region of the somatotropin gene containing 2 and 3 exons. The resulting amplification was sequenced on an Applied Biosystems 3500 Genetic Analyzer using the BigDye® Terminator v3.1 Sequencing Standard Kit according to the protocol. Four single-nucleotide polymorphisms of C12T, C72T, A122G, A235G were detected in the investigated region of the growth hormone gene (somatotropin). The positions of the found SNPs were determined from a similar section of the gene in a red deer (Cervus elaphus), the genome of which was completely sequenced. Two SNPs are in the intron, two are in the exon. The frequencies of genotypes and alleles were calculated in the six studied populations of domestic and wild reindeer. The results obtained in the study make it possible to draw conclusions about the genetic difference between the populations of wild and domestic reindeer of Russia, and between the domestic reindeer of different breeds. Theme АААА-А-18-118021590138-1.