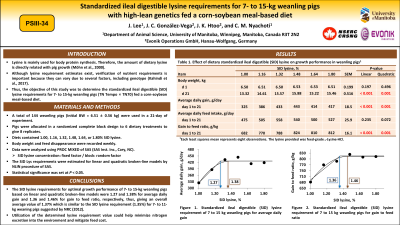 Continued genetic improvement necessitates the verification of nutrient requirements for newly developed pig genotypes. Therefore, the objective was to determine the standardized ileal digestible (SID) lysine requirements for 7- to 15-kg high-lean piglets (TN Tempo × TN70) fed a corn-soybean meal-based diet. A total of 144 piglets (6.51 ± 0.56 kg BW) were assigned to 1 of 6 diets in a randomized complete block design based on BW to give 8 replicate pens each with 3 pigs over a 21-d period. Sex was balanced as 4 replicates for each male and female. Diets contained 1.00, 1.16, 1.32, 1.48, 1.64, or 1.80% SID lysine, achieved by adding crystalline L-Lysine·HCl at the expense of cornstarch. Other indispensable AA were provided to meet the requirements. Individual BW and feed disappearance were recorded weekly and blood was sampled on d 1, 14, and 21. Data were analyzed using MIXED procedure of SAS including the SID lysine concentration as the fixed effect and the block as the random effect. Sex effect was not significant, thus was excluded from the model. The SID Lys requirements were estimated for linear and quadratic broken-line using NLIN procedure of SAS. Lysine content did not affect ADG and ADFI during wk 1, but quadratically increased (P < 0.05) G:F. From d 14 to 21, ADG and G:F increased (P < 0.05) quadratically by increasing dietary lysine content. Overall, increasing dietary lysine content quadratically increased (P < 0.05) ADG and G:F; whereas, plasma urea nitrogen quadratically decreased (P < 0.05). In conclusion, the SID lysine requirements for optimal growth performance of 7- to 15-kg piglets fed corn-soybean meal-based diets based on linear and quadratic broken-line models were 1.27 and 1.38% for ADG and 1.36 and 1.46% for G:F, respectively, thus giving an overall average value of 1.37%.